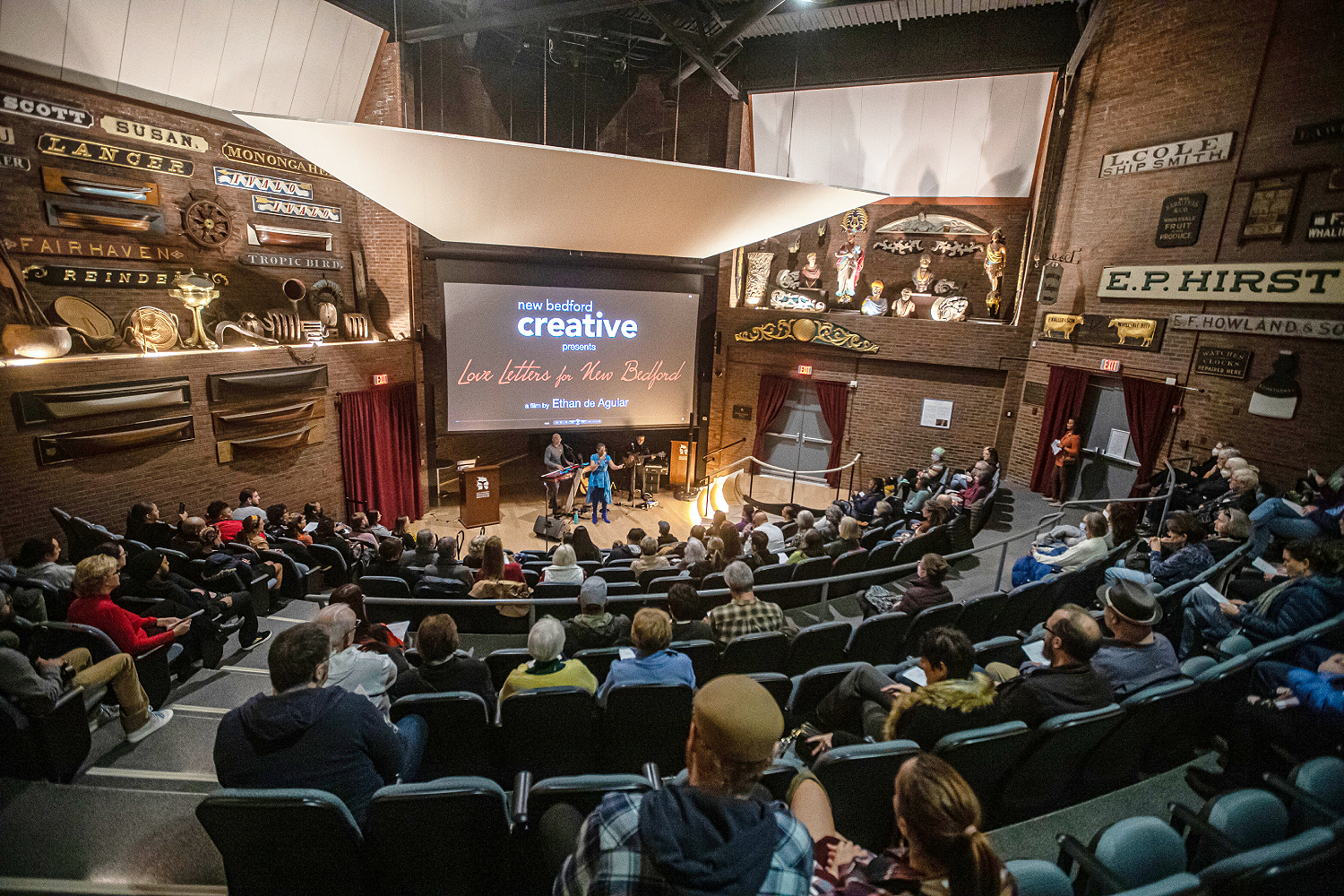 You know when you receive sustained applause, whoops of joy and shouts of appreciation that you’ve done something right.

On Sunday, Dec. 4, filmmaker Ethan de Aguiar, co-producer Beatriz Oliveira, and the speakers and performers at the a special private screening of the short film, “Love Letters for New Bedford” knew they had done something very right.

There’s an arts and culture event, and then there’s a moment in time that just feels special. More meaningful. More profound. As much cathartic as cultural.

That was the vibe in the Cook Memorial Theater at the New Bedford Whaling Museum on December 4th. “Love Letters for New Bedford” may have been the culmination of a months-long project, but, as a special event, it felt like more of a new beginning than an ending.

“Love Letters for New Bedford” was a collection of projects by Creative Ambassadors around the city before it was a short film. Funded by the Barr Foundation, Arts Midwest selected the city and New Bedford Creative to form the Creating Connection project.

But, as filmmaker de Aguiar stated to Southcoast Today, “This video is less about documenting what we did and more about embodying the idea behind the initiative and presenting that.”

Indeed, the short film that resulted represented nothing less than what #NBcreative’s Creative Strategist Margo Saulnier calls “the fierce ambition” of city artists.

That ambition especially manifested itself over the past few years. Confronted with a pandemic and social reckoning, New Bedford’s creative citizens met the challenge by becoming stronger – together – than ever before.

That was reflected during the exquisite event planned for guests around the “Love Letters for New Bedford” reception – and it gave the afternoon a deep resonance.

Beautifully orchestrated by Beatriz Oliveira – whose Beatriz & Company always astounds with thoughtful and meaningful event planning – the afternoon featured the voices of New Bedford center stage reflecting on both the angst and opportunity of resilience in uncertain times.

Leading the way was vocalist Candida Rose Baptista, bringing the audience to its feet and touching its collective heart through songs, such as her specifically written ballad for 2020, “Love Each Other Through.” Meanwhile, the spoken word as practiced by Iva Brito and Maia Jaye Livramento opened a new dimension on what being New Bedford Creative means in the city today.

Finally, “Love Letters from New Bedford” – the short film which will now be submitted to film festivals around the country – pierced through the darkness and shined a spotlight on the city’s resilient spirit and ability to project…hope.

That’s what the audience felt – and needed to feel. And that’s why the film may have screened to a finish that Sunday afternoon, but the story is just beginning.

(The Creative Ambassadors and their projects are profiled on this website in the “Media Hub.” “Love Letters for New Bedford” won’t be available to view online until after the film festival submission process has ended, but New Bedford Creative will be sharing other video features from Ethan de Aguiar soon. Get notified by following Facebook.com/NewBedfordCreative.)