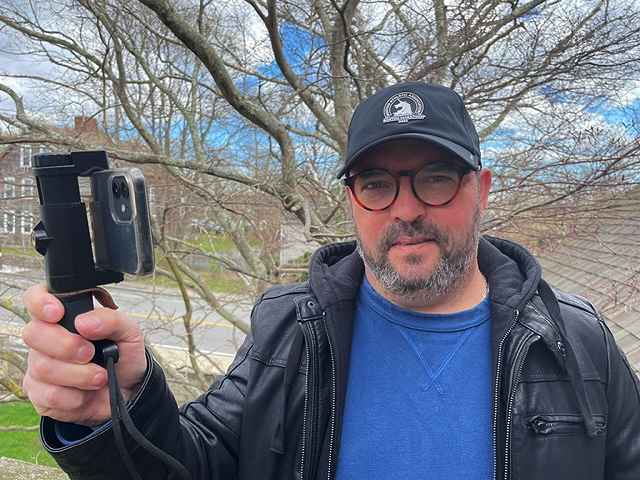 Perhaps no other Creative Ambassador’s journey to New Bedford has been as epic – and fraught –  as that of Gerardo Beltrán Salinas.

Beltrán Salinas worked for more than 30 years as a journalist in Santiago de Chile. When he and his family made the decision to come to the United States four years ago, it was necessary to pursue different means of attaining an income.

He recalls, “I tried to generate income in everything that would allow us to improve our scarce  budget. We had to pay rent and food for a family of four (including wife, Paulina, and children Antonio and Sofía).

“With my wife, we made French macaroons and sourdough bread. I also washed dishes, roasted chickens, mowed lawns, and helped with construction.”

However, the time wasn’t entirely devoted toward keeping them financially afloat – nor was it wasted in the larger scheme of his life. In fact, as a journalist, he was discovering “los primos” in New Bedford.

Los primos is translated from the Spanish as people you meet in daily life who are familiar, even familial. It refers to folks who are figuratively if not literally cousins. It is, Gerardo Beltrán Salinas explains, the affectionate way in which Central American immigrants treat each other.

There is a large community of los primos in New Bedford, and many face similar challenges like Beltrán Salinas did – or even many more.

“I  realized that the problems I was complaining about were nothing compared  to the experiences they had had to face to get here. I felt and still feel  privileged. Every immigrant I have met has a great story in their bag,” he says.

And now, they have someone to tell their stories.

Gerardo Beltrán Salinas is once again practicing journalism. This time in this city, as an independent journalist and also for the online non-profit news resource, The New Bedford Light. In that familiar role he is putting a spotlight on the issues and opportunities important to los primos.

He says, “I have  known their loneliness, because most of them come without their families. They tell me how they go into debt to pay the coyotes, how they have  crossed the border in multi-day walks. Stories of hundreds of human beings  crammed into a trailer, crying children and anguished mothers.

“But I also  got to know their resilience, their joy of living, their respect and love for their culture and traditions, and their tremendous humanity. I write about them, I make videos about them, I let them talk, I celebrate their achievements…”

His Love Letters for New Bedford – and for los primos – will be a series of videos documenting Patio de Comida, the food patio organized by the Community Economic Development Center in North End, New Bedford’s in Riverside Park.

He believes that culture is the way in which los primos have dealt with being uprooted – and are now building a new community. He has witnessed how their food, textiles, sport and music have brought them together in New Bedford – and is ready to be their voice.